Peche! My favorite non-english word for peach. Thanks France!

Recently I had the pleasure of returning to M&M Peach Ranch where some friends and I picked Bing cherries earlier this summer. Their Ryan Sun peaches ripened up at the end of August so a visit was in order. We took the longish drive out to Lake Hughes and delighted in picking the most delicious organic peaches. It was an absolutely lovely day, with lovely friends. 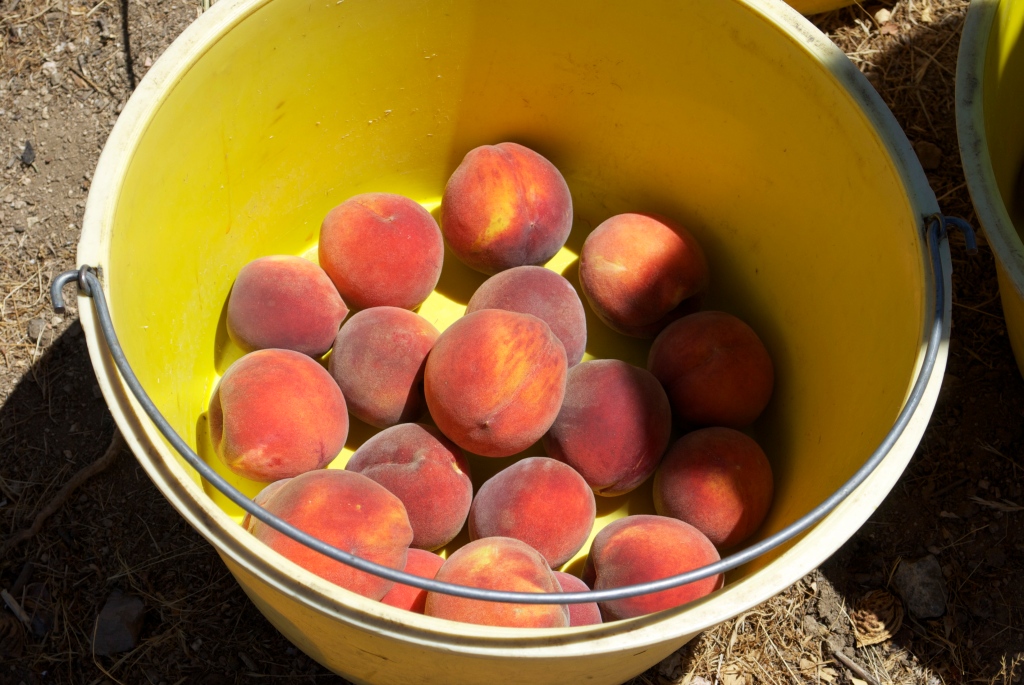 Before going home, we pulled over to frolic in this beautiful field of flowers. It was pure joy. 🙂

I went home and decided that my peaches ought to end up in a peach and blueberry buckle infused with tempeh bacon (inspired by Eat the Love of course!). They also ended up in a delicious Apple-Peach Pie w/ Bourbon and Rosemary Crust (recipe below). The remaining peaches that were not eaten were blanched, peeled and frozen. I think this new ice cream recipe from my favorite non-vegan baker extraordinaire may be order—veganized of course! 😉

The buckle is easy. Just roast your peaches with tempeh bacon and a drop or two of liquid smoke per Irvin’s instructions found here on his original post. Make the topping listed on Irvin’s site, subbing out the butter for Earth Balance and omitting the salt. For the cake, I just used the buckle recipe from Vegan Pie in the Sky, which is great. Don’t bake according to those instructions though, as they are a little different. You won’t be inverting this buckle as that book instructs you to do. Just use the batter in place of the non-vegan version and voila, BUCKLE in your mouth.

1 recipe of your favorite pie crust with one tbsp chopped fresh rosemary incorporated into the dough—I like the one from Vegan Pie in the Sky and Martha Stewart’s made vegan. Martha’s is the first crust I’ve ever made in a food processor. Kind of easy! I still like making it by hand though 😉