Recently I had the good fortune of learning the fine art of tamale crafting from a radical chef, Kajsa Alger of Susan Feniger’s Street. Chef Kajsa was awesome. She taught a great workshop and all of us who were lucky enough to take it are now masters in the art of fine tamales. Only the finest tamales will do. She taught us the secrets to perfect masa and showed us how we could spice up regular masa with pumpkin, cinnamon and all kinds of other goodies. We also learned how to create a beet and cauliflower ceviche as well as humitas, the South American version of tamales, wrapped in banana leaves and made with grits instead of masa. All you need to say to me is grits and you have my attention. Anyone who doesn’t love grits have only eaten gross grits…and they can be gross. But when they’re right, they’re really right.

At the end of a delightful workshop, Chef Kajsa was signing copies of the book she helped Chef Feniger pen, Street Food. I glanced through the book once before when I was eating at Border Grill. Susan Feniger’s restaurants are incredibly vegan friendly. I’m not 100% sure why that is, but I love it. You can get gourmet, delicious vegan options at all of her places which this vegan really appreciates! I looked through the book again and decided it had enough vegan recipes and enough recipes that could be adapted into something vegan that it was worth a purchase. Chef Kajsa kindly signed it for me and off I went.

The story of how I came to make my first recipe from the book could turn into a huge and crazy separate post of its own. I decided the first thing I wanted to make was the Trinidad Duck and Potato Curry with Plantains and Green Beans. The recipe called for a few things I didn’t have slash never heard of. Particularly this herb called shado beni/culantro. Yeah, just like cilantro, but with a u. So, I had to go around looking for it. I went to 3 asian markets before I finally found it 99 Ranch Market under its Vietnamese name. 99 Ranch is the best btw and I should have gone there first. It always fills all my asian cooking needs. But, in my travels to other markets in search of this herb, I happened upon a bunch of yuzu. Yuzu is a Japanese citrus fruit, likely a product of the sour mandarin and a plant called Ichang papeda. Even though I wanted the ingredients for the curry, I had remembered seeing yuzu as an ingredient in another dish in the book, although I could not remember which. I snatched up a couple, thinking I’d make the curry and whatever recipe it was that called for yuzu because yuzu is relatively rare and hard to find. When I got home, I discovered that I had seen spicy yuzu mayo in the book which was an accompaniment to a Tatsutage Fried Chicken. Fried things kill me a little, but I went ahead and made a batch of chicken seitan, collected all of the other ingredients and made the yuzu mayo. The resulting dish was this deliciously crispy fried seitan with delicious Vegenaise yuzu dipping sauce.

The batter was filled with all kinds of goodies like furikake, a mix of sesame seeds, nori and other goodies. Vegans be on the lookout though because most furikake has some kind of bonito or fish flake in it. I found Eden brand which was vegan and delicious.

I also did end up tracking down all of the obscure things I needed to make theTrinidad Duck and Potato Curry with Plantains and Green Beans. Anyone that knows me knows that one of my guilty pleasure lies in canned mock duck. Don’t judge me. You can get mock duck in any asian grocery and it’s kind of wonderful if you know what to do with it. Which I do. Because I loves it. Most of the curry ingredients were made into a homemade green curry paste. It had a beautiful aroma that I can only describe as intoxicating. The resulting curry was extremely good. The paste was so deliciously savory, cooked with coconut milk….ay. I love plantains too and every bite of sweet curry soaked plantain was better than the next. You’ll have to forgive the picture. I think the curry looks perfectly unappetizing in photo form. The colors don’t look so great and I really should have wiped my bowl, but hell….I forgot. I promise it’s one of the most flavorful, yummy things you’ll ever eat, despite it’s lack of color.

The last thing I ended up making was the Waipio Valley Sweet Fried Rice. First, since I was at 4 asian grocery stores I couldn’t get away without buying a big ol’ taro root. I’ve discussed my sick love of taro here before. SO GOOD. The rice recipe happened to be vegan already and didn’t have too many obscure ingredients. Plus, it’s Hawaiian so of course I couldn’t resist. This rice was so good. The name is deceiving as I found this rice to be savory with lightly sweet elements mixed in. This may be my favorite of the three recipes I’ve made so far. My only complaint/note is that the recipe calls for too much oil. Next time I make this I am def reducing the oil. 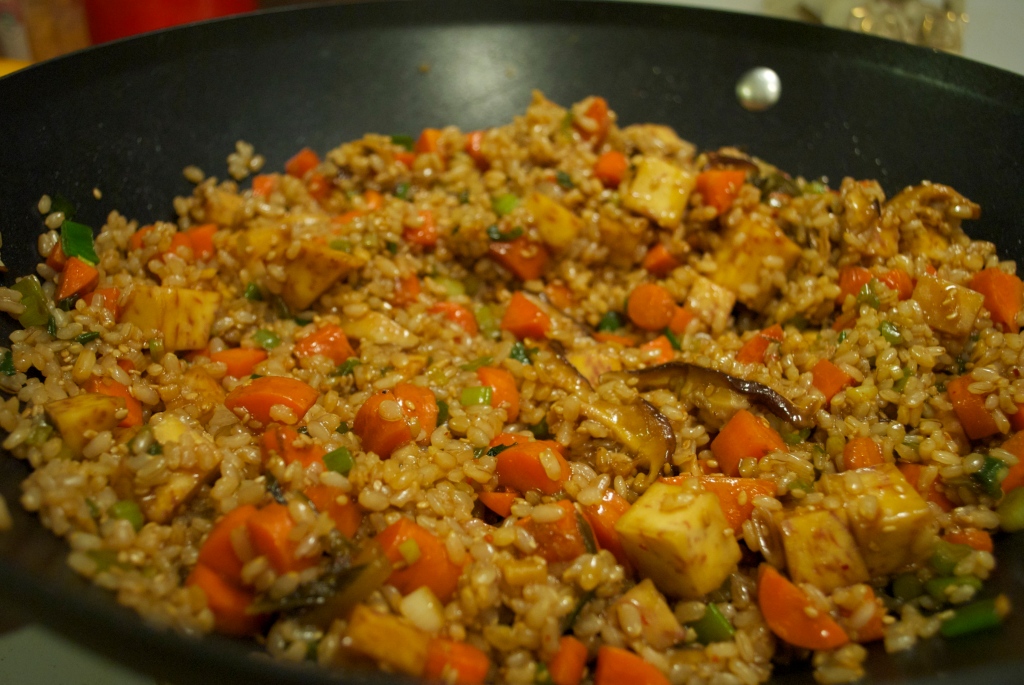 I have no idea what I am going to make next, but I have decided that I love this book. All three of these recipes were really good. I like that each recipe had several layers of flavor. There was real depth in each bite and I love that, even in the rice, which was a relatively simple dish compared with the fried seitan and the curry.

I would recommend this book to vegans and non vegans alike. My only warning is that if you don’t live near a major metropolitan area, you may have difficulties in locating some of the ingredients called for. My suggestion is to do your research, Chowhound.com is ever a great place to go when you’re searching for something particular in regard to food. And always remember that many things like various cooking wines and things like furikake can be purchased online. I think there are even websites where you can order fresh yuzu and other obscure fruits.